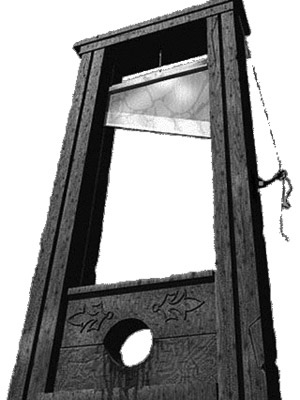 It is my first season of playing in a guillotine league, the new fantasy football concept popularized by (and maybe invented by?) Paul Charchian. My strategy can be summed up as Bid Low, Bid Late. I will explain what I mean in the remainder of this post. Since I have never done this before, I don’t know if it is a good strategy or a winning strategy. Win or lose, I expect to write regularly at The Fantasy Value Project about my team and what I am learning about guillotine league strategy , so check in regularly or sign up to the e-mail list to stay apprised.

The idea is of guillotine leagues is simple: You start with 17 teams.  Each week, the lowest-scoring team gets guillotined, meaning it is eliminated from the league and all of its players are dropped to waivers. So in Week 2, there are 16 teams left, in Week 3 there are 15, and so on, until in Week 16 only 2 teams are left, and they play for the championship, and usually, the entire pot of money. When a guillotined team’s players are dropped, the other teams can bid on them using a FAAB budget.

Intrigued by the concept, I joined a guillotine league for the 2018 season. I have survived the first 6 weeks (I write on Monday of Week 6 before the Monday night game), and I am no longer concerned that if my league-mates figured out my strategy, it would put me at a substantial disadvantage, so I’m going to start talking about my strategy and my team here.

A few things about my league: it is composed of sophisticated fantasy football players, as I suppose most or all guillotine leagues currently are. The format is PPR. It is on ESPN, with that site’s default scoring settings. The roster is 1 QB, 2 RB, 2 WR, 1 TE and 3 RB/WR/TE flex spots. The initial rosters are determined by an auction using a $200 budget. Each team’s FAAB budget is $200. It is winner take all.

The strategy of “Bid Low, Bid Late” mostly speaks for itself. The goal was to try to build a resilient enough team through the draft to not have to spend much FAAB money early in the season. There are a few reasons for  this:

The upshot of this is: if you spend a lot of your FAAB budget early, not only will you be less able to spend on top players later, you are also taking a bigger gamble on who the top players will be in Week 16.

My team has survived through Week 6, and has the second highest remaining FAAB with $814, so arguably this strategy is paying off.

This overall strategy dictates a conservative draft strategy of trying to build a team that will not lose in the first few weeks. I had never participated in an auction league before, and my experience was based on doing mock auctions on Fantasypros. Based on my mock auctioning experience, I figured that the top players were overpriced but that second-tier players with upside – like Mixon, Cooks,  Kelce, Fitzgerald  – were often reasonably priced, and players that were usable as starters were available for cheap if you waited for them late in the auction. I settled on the following draft strategy:

The three players I mentioned – Mixon, Gronk and Kelce – were particular targets that I was willing to spend $30-$40 on. I especially liked the idea of getting both Kelce and Gronk, as I often had in mock auctions, since that would be taking the top 2 tight ends (I figured) away from other teams and locking in a substantial advantage most weeks against most of the competition at the position.

In part, this was because of the ESPN algorithm that kicked in for teams that did not attend the auction. The first player to go was Le’Veon Bell for $80 (out of a total $200 budget). Since this was after it was known that he would be sitting out, it was a terrible expenditure by the ESPN auction-bot, and the team that drafted him was the first to be guillotined. Other top players went for too much as well, including some bid on by teams that actually attended the draft. Some of the prices included: Saquon Barkley for $70 (by the team that was eliminated in Week 4), Todd Gurley for $86 (team still surviving), Antonio Brown for $71 (team still surviving), DeAndre Hopkins for $65 (team eliminated Week 3), and Dalvin Cook at $51 (team still surviving).

Since I was committed to not go over $40 or so for any player,  I was unable to get any top-tier players, unless you count Kelce, who I got for $30, as top tier. I was not able to get Gronk, who went for $50 (team still surviving but will probably be eliminated Week 6). In did get my other main target, Joe Mixon, for $40. I did not spend $30 on any other players, but with the money I saved by not getting any superstars, I got Jarvis Landry ($29), Doug Baldwin (who I somehow thought was an upside play, $26), Corey Davis ($21), Chris Thompson ($17), Alshon Jeffery and Sammy Watkins ($10 each).

The Season So Far

This team, plus various cheap players that I bid on with the remaining money or added off waivers or free agency, have not scored a ton of points compared to other teams in the league; but they have scored enough points to get by. In weeks 1-6 my team scored the following point totals: 102.1, 128.6, 97.1, 120, 93.3, and 108.4. Generally not great, but enough to avoid elimination.

I have generally followed my strategy of bid low, bid late. It’s not that I don’t bid on good players; I just get outbid by teams with more aggressive strategies. I have acquired two players, both of whom I now regret overbidding on: Devonta Freeman, who I spent $115 on after Week 2, and Cam Newton, who I spent $66 on after Week 5.

I acted a bit out of desperate need for RB by bidding $115 on Freeman. $115 is about one ninth of my overall FAAB, which is about the amount I ought to spend on a player I am more or less certain will be a Week 16 starter. Between injuries, the fact that Freeman is not a top-7 or so RB when healthy, and his probably tough matchup against Carolina in Week 16, Freeman looks like an almost-certain non-starter on Week 16. Not to mention, he hasn’t done anything for my team since I picked him up. (Update: since writing this, he has been placed in IR.)

Newton, on the other hand, I project as a likely Week 16 starter against the Falcons. But $66 was still too much to bid on a quarterback, in my opinion. I had a desperate situation at QB, starting Prescott and Mayfield. But I have not accounted for the fact that QBs are plentiful and cheap, and many great options will be dropped to waivers for the rest of the season. I should have saved my money to spend on RBs and WRs later in the season, and risk elimination with a weaker team now so I can be stronger later in the season.

FAAB: Where I Stand

Despite the regrettable spending, I have $814 FAAB left, the second most. Only one other team in the league looks like it is using the same strategy as me – it has $912 left. The other team might have been able to stick to the strategy better because it has a stronger-performing team than me so far, including Thielen, Roethlisberger, Hyde and Ebron. At least Thielen looks like a strong candidate for Week 16 starter.

Besides this team and me, only two remaining teams have more than $300 in FAAB left, and they have $614 and $505. Some of the teams have spent huge amounts of FAAB on a single player. Some of the larger expenditures have included $777 for Tyreek Hill, $750 for Saquon Barkley, $700 for DeAndre Hopkins, $676 for Michael Thomas, and $403 for Mike Evans.

I think my team and my strategy are doing relatively well. I don’t expect any team with $300 FAAB or less to win the league, which means that the competition is down to me and 3 other teams. I think my FAAB advantage over the teams with $614 and $505 gives me a good chance at outbidding them for top players. I am at a disadvantage to the team with $912 FAAB, but not that great a disadvantage.

As I write these words, a number of potential top players hit the waiver wires from this week’s unfortunate team: Stefon Diggs, Keenan Allen, Rob Gronkowski, Josh Gordon, and Sony Michel. I will make some bids on some of them, and update the readers later on how that turned out.