In this article, I identify three players to avoid, or at least fade. I am resisting the temptation to weigh in on what I think of them as players, because I want this to be strictly about the guillotine league format. These are players who should be downgraded in the guillotine format, specifically in Fanball, compared to conventional leagues.

In other words, I am not at all saying I think these players are overvalued in general. I am saying that because of factors that are especially important in guillotine leagues, such as volatility, bye weeks, or the fact that they are stashes – they deserve to be downgraded.

END_OF_DOCUMENT_TOKEN_TO_BE_REPLACED

Hi everyone! I am excited to announce the roll-out of a new app that I hope you will enjoy, called CrowdSorcerer.

CrowdSorcerer lets the whole fantasy football community (who use the app) determine player values by making a series of choices between players or sets of players.

The app serves up choices between randomly selected players, and the choices made by you and other users are used to update player values and ranks in the database. If you use the app in dynasty mode, the app includes draft picks as well.

After you have done two one-to-one comparisons and one multiplayer comparison, you can view the full rankings and values for a position of your choice – RB, WR, QB, or TE.

As we always do here at the Fantasy Value Project, we have made this app not only about rank, but also about numerical values, which is much more informative than rank.

Here are some screenshots to give you a sense of what the app is like. You start by choosing between redraft and dynasty, and between standard scoring and PPR.

You then get a choice between two players, like this one: 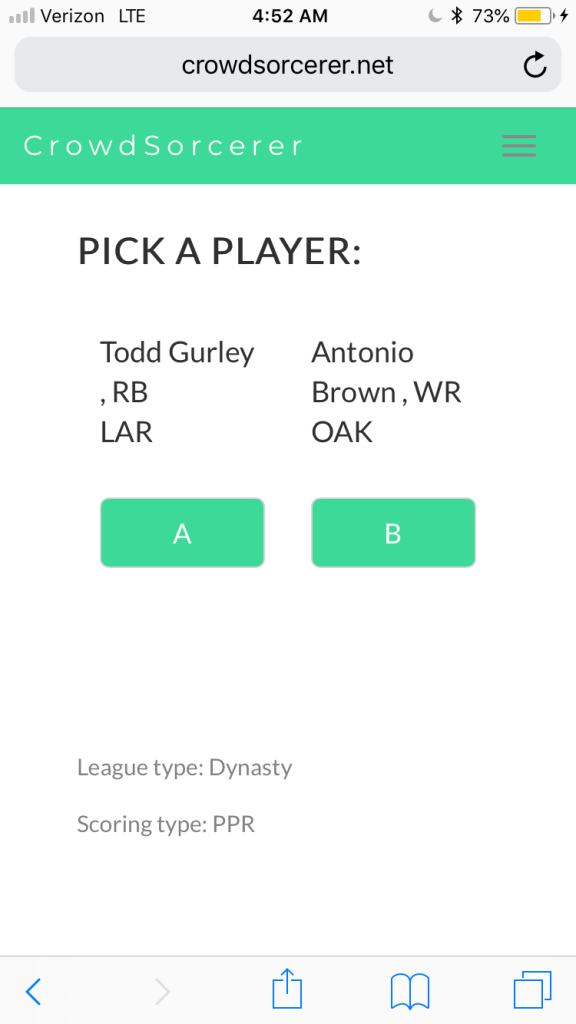 I chose Todd Gurley, so I got this results page: 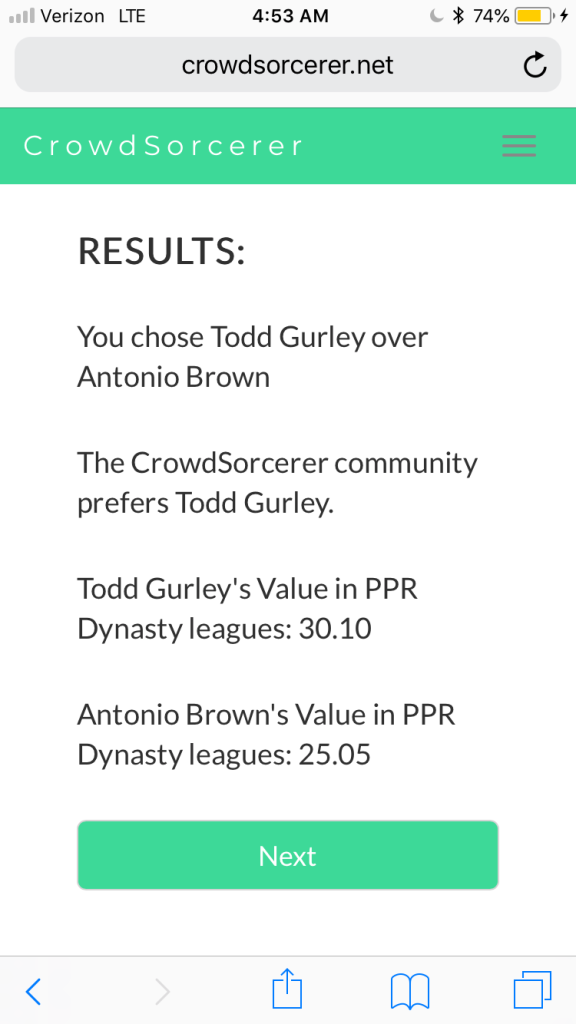 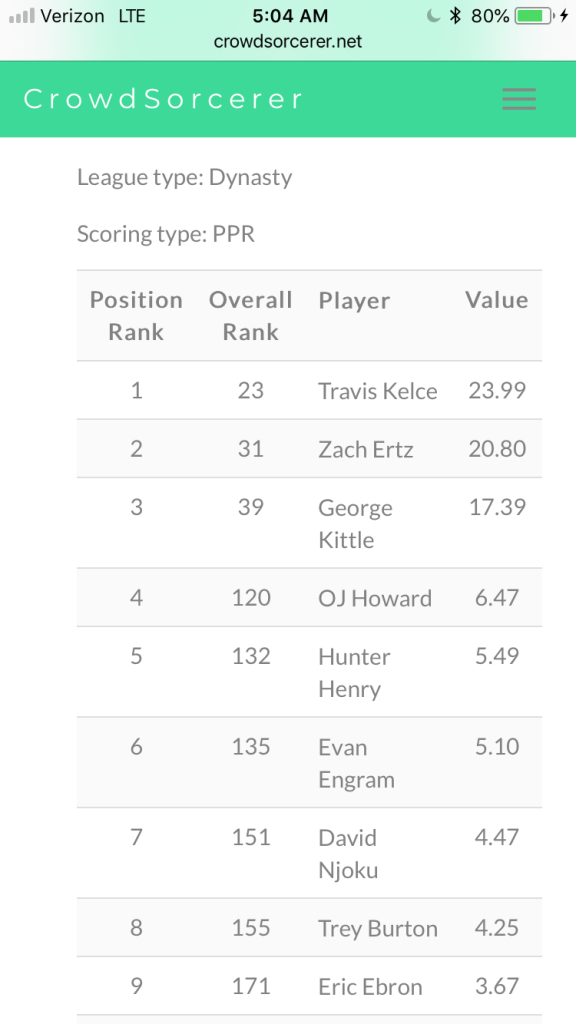 That number was chosen because it’s the total auction money in a 12-team league with a $200 budget. So think of it as the amount that the community would spend on the player in an auction league.

Click the link and check it out for yourself. The more people use it, the more accurate the values and ranks get. And please let me know if you have any questions or comments.

The winning strategy in guillotine league football is Bid Low, Bid Late, which calls for spending as little as possible until late in the season. In order to survive late into the season, players should aim to start with a resilient team.

This article suggests seven tactics for drafting in a guillotine league to build a maximally resilient team in support of the Bid Low, Bid Late strategy. These are the tactics I am suggesting:

What follows is a work in progress, representing my best hypotheses, and not a backward-looking analysis of proven tactics. The guillotine league format is only a year old, and the one league I have played in involved an auction, not a draft. I am implementing these tactics, to various degrees, in the leagues that I am playing in this year. I expect to report back on how well they worked out.

The tactics I am describing here are tailored to Fanball guillotine leagues. These leagues have 17 teams, each of which drafts 12 players. Starting lineups consist of seven players: QB, 2 RBs, 2 WRs, TE, and flex (RB, WR or TE). Scoring is conventional PPR, except that passing touchdowns are worth six points, not the conventional four.

The season is structured differently than conventional fantasy football seasons. The first thirteen weeks are the “regular season,” where each week, the lowest-scoring team is eliminated, and its players are dropped to waivers. Weeks 14-16 are a three-week playoff, with the winner determined by the cumulative three-week score. The top three positions pay out.